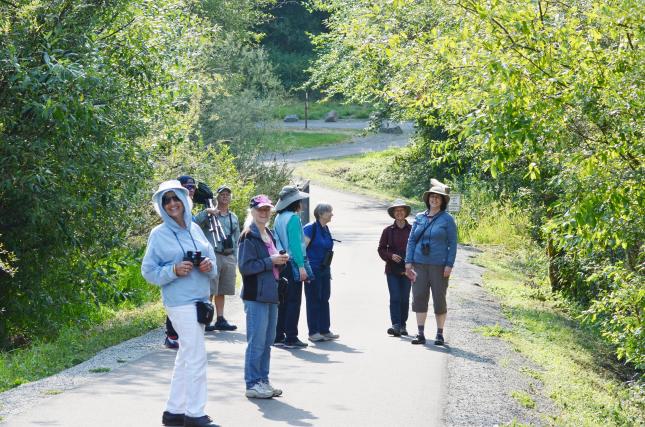 THE NEXT BIRD WALK DATE IS SATURDAY, February 1st, 2020 TO Lake Fenwick AND Weyerhaeuser Pond.

COME JOIN US! IT'S FREE!

The morning of December 14th was cold and rainy. Only three of us braved the elements to go birding at Normandy Park Cove, Seahurst Beach and Mathison Park. As the morning progressed it just got wetter and colder. Not a wren nor chickadee nor kinglet could be found. At the Cove we were happy to view several White-winged Scoters and several Harlequin Ducks through spotting scopes. A big commotion out on the water was caused by sea lions thrashing about, catching and eating salmon. A Belted Kingfisher was heard chattering a few times but not seen. Seahurst Beach offered an opportunity to study and compare male Common Merganser and male Red-breasted Merganser. Rafts of Horned Grebe, Surf Scoter and White-winged Scoter were present here, and a few distant Common Loons and Red-necked Grebes were seen. We decided on one more stop at Mathison Park, and saw our only Bald Eagle of the Day on a cell tower next to Highway 518 on our way. A walk around the park edges did not yield birds, but on our way to the car we noticed a crow diving at something. We gave it our immediate attention. Perched in a tree was a Cooper's Hawk, which took off and flew over the park out of view. We called it a morning, but on the way back to Wild Birds Unlimited we found one more raptor, a Red-tailed Hawk perched on a short utility pole. If we hadn't decided to add Mathison Park to our morning we would have missed our only raptor species of the day. A total of 29 species were found. Hope you can join us in February!