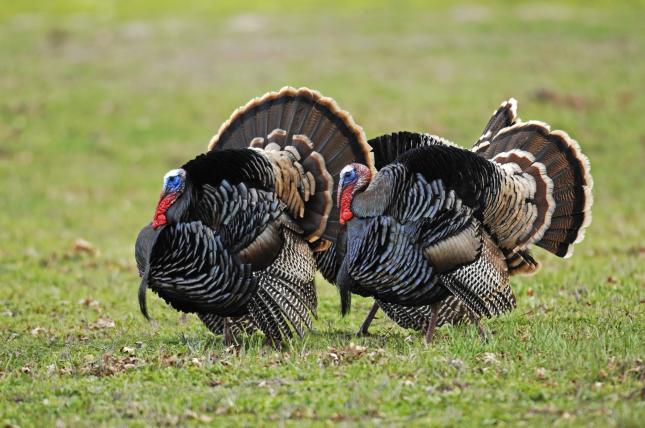 The Wild Turkey, Latin name Meleagris Gallopavo, is a bird with a long history. They originated in ancient Mexico where they were first domesticated by the Mayans around 800 BC. They were considered useful as a food source and also as a supplier of feathers for decoration and ritual purposes. The birds were then passed along to visiting tribes until they eventually made their way to North america and began to be used by the natives here starting around 1100 AD. From that point onward their distribution was rapid and expansive and they now inhabit every state in the United States except Alaska.

The male and female of this species are both very similar. The basic coloration is a uniform dark brown that appears on the feathers as a shimmery bronze-green iridescence. The large wings have a distinctive white bar while the rump and tail feathers are tipped with a rust, or white, band. The head of both sexes are are predominantly bald and may vary in color. The only noticeable difference is males have a bold red wattle. The general length of a Wild Turkey is 43-45" and the wingspan is an impressive 49-57". There is a slight variance in weight with males occupying a range of 11-24 LBS and females 5-12 LBS.

Due to their shining plumage and larger size, the spring mating dance of the males is quite striking. They puff up their feathers as much as possible, arrange their tales into large fan shapes and begin to strut ( cue the BeeGees music ). Nests are constructed on the ground and arranged around the bases of trees, under brush piles, and sometimes in open hay fields. A shallow depression of 1" is made in the ground and extends 9-13" long by 8-11" wide and lined with leaf litter.

In each nest a clutch of eggs is laid and can contain anywhere from 4 to 17 eggs. Only one brood is hatched per year and the young chicks, called poults, will incubate for loosely 27 days before they come out of their shells. Surprisingly they only need one day in the nest before they are off with mom to learn how to forage for their own survival. Favorite foods include fern greens, nuts, small seeds, berries, and the odd amphibian or lizard. All of these are available along the roads, fields, and mature forests they call home. It's very interesting to me that Wild Turkey numbers continue to grow despite them being such a common prey animal for most predators. However, I also can't imagine what nature would be like without the Wild Turkey so I hope they stick around.